There are times when a lousy memory comes in handy. When watching a movie I’ve seen before, for instance, it can be like watching it for the first time again! I’m still moved-surprised-delighted-shocked by the action on the screen and twists in the plot  because I’ve forgotten many of those details from the previous viewing.

The same thing happens this time every year. I get a knock on the door from the UPS guy, he hands me a package that says “perishable: refrigerate immediately” and wonder to myself what that could be.

It’s my annual Valentine’s Day bouquet from an admirer. I blush a little bit thinking about the treats he sends. And I start scheming exactly how I’m going to use that endive.

Yep, endive, wrapped up in a lovely bouquet complete with sparkly red ribbon. No endive is ever marketed–I’m sure–as I receive them in this box. The small heads of the pale green and red lettuce still attached to their long, brown, funky roots just for the effect of the long-stemmed rose-like presentation. (NOTE: one year I was convinced that there had to be some culinary value to that root, trimmed some and had a nibble. Blech. If there were a Scoville scale for bitterness, these would be off the chart.)

Six or eight years ago at a conference I met a gentleman from California Vegetable Specialties, folks down in Rio Vista, California who devote themselves to growing, and teaching us about, endive. I guess I impressed upon him my longtime love of endive, because not a year goes by now that I don’t receive the Valentine’s Day delivery.

I struggle with referring to endive as a type of “lettuce,” though by strict definition–a garden vegetable with edible leaves–it is. And since one of endive’s most common uses is as a salad ingredient, the association is natural. But one reason I’m so enamored of endive is its sheer versatility, so much beyond any other member of the lettuce clan.

Starting simple, the first thing I did with a few heads of this year’s delivery was one of my all-time favorite salads, one I’ve mentioned at least a few times in the past: sliced endive, chopped toasted nuts (walnuts or hazelnuts) and crumbled blue cheese tossed with a red wine vinaigrette (preferably made with walnut or hazelnut oil). And last night I simply halved 3 or 4 heads and cut out the tough (and bitter!) core, leaving the heads together as much as possible. A couple tablespoons of butter melted in the skillet, I added the endive cut side down and browned gently a few minutes, then poured in some white vermouth, topped loosely with a piece of foil and reduced the heat to lightly braise them until the vermouth was evaporated and the endive was tender. This is a preparation in which many folks would sprinkle in a bit of sugar to counterpoint the bitterness and contribute a touch of caramelized-browning. But we like them au naturelle.

And I’m a big proponent of endive leaves as one of the very best edible containers going. For a cocktail party, buffet, any party setting for which finger food is on the menu, nothing beats foods that you can pick up, pop in your mouth and leave no dishes or utensils for cleaning up later. A host’s dream dish! Oh, and speaking of game night (which I’ll be doing a lot here soon, since my new book Gourmet Game Night is being released in a couple of weeks), endive leaves are one of the best ways to serve your guests an elegant, flavorful dish that won’t distract at all from the Scrabble tiles or poker cards or Cranium clay. In that book, I chose to embellish the endive with a simple salmon poke (diced raw salmon tossed with soy, sesame oil, cilantro and slivered red onion). Digging around my photo files, I found this image of the leaves topped with a duck mixture of some kind, I’m afraid that lousy memory leaves me at a loss about details of that preparation. But shows just how diverse uses for endive can be.

One of the most decadent uses I know of for endive is gratin d’endive, or endive à l’ardennaise as Anne Willan cites the recipe in her timeless book French Regional Cooking. The whole heads are first braised until mostly tender. Then each is wrapped in a thin slice of ham and arranged in a gratin dish, topped with lush béchamel sauce, topped with gruyère cheese and baked until bubbly, hot and nicely browned on top. A simple salad alongside, and you’ve got a wonderful wintry way to serve delicious endive.

I totally ♥ endive. And though I use it often throughout the year, always feel an extra attraction this time of year thanks to my annual delivery on my doorstop.

A Love for Endive

I fell in love with endive while at cooking school in France, one of many ingredients I’d had little interaction with before embarking on that adventure. Among salad greens, endive has a bit more character and flavor

than everyday lettuce, not as bitter as radicchio, and is more versatile than many other greens. As I mentioned in this post, one of the fail-safe dinners in my tiny Paris apartment, with its two-burner kitchen, was sautéed endive with rotisserie chicken from the neighborhood butcher.

And a favorite traditional bistro prep with endive is going to be dinner here soon. Heads of endive (baked or steamed first, until tender) are wrapped in good sliced ham, arranged in a gratin dish and topped with a rich béchamel sauce that’s embellished with a good dose of grated Gruyere cheese. Boy, does that sound delicious right about now!

My all-time favorite salad is composed of sliced endive, toasted walnuts, crumbled blue cheese tossed with a vinaigrette made with red wine vinegar and walnut oil. I swear, I could eat that every night and not tire of the delicious combination.

Another beautiful thing about endive is that it’s one of the very best edible serving pieces. Having friends over for some game-playing? Consider a clean-fingers menu item served in whole endive leaves. Spoon some shrimp with Louie dressing, crab with cocktail sauce, chicken-tarragon salad or other tasty mixture into the broad end of the leaf. Guests can pick up the leaf by the tapered end and enjoy the treat without dirtying their fingers. This past weekend I did just that for a cocktail snack, using leftover roasted duck from the night before. I added some hoisin sauce, soy sauce, chopped cilantro, sesame oil and a splash of sake. It was a big hit. Endive to the rescue, yet again.

My Kind of Fast Food

When I left for La Varenne cooking school back in the summer of 1989, I thought I had a tidy 9 months ahead of me. But what already was clearly going to be a fascinating adventure became even more so when the excursion got extended a few different times and became 2 1/2 years of French bliss. I finished my degree as planned, but stayed on for new opportunities that presented themselves. It became something of a bohemian lifestyle, moving a lot, often back and forth between Paris and the northern Burgundy countryside where the school’s Château du Feÿ is located (and currently for sale, if you’re in the market for an amazing château property!). Even in Paris, I lived many different places: a spare room in a family apartment, a spare apartment in the La Varenne building, even on a friend’s couch in the Austrian Embassy for a week or two (he was the chef and I was between gigs).

By far my favorite spot, though, was the tiny apartment where I hung my chapeau for 6 or 8 months while working for Patricia Wells and still keeping my fingers in some La Varenne work (just prior to Anne Willan having begun the Look & Cook book series, which kept me in France for another year). The bed in this very small nook of an apartment, on Rue de Trois Frères just below the basilica Sacré Coeur in Montmartre, was on a platform raised above some of the living space. The kitchen so small I had an under-counter fridge and just 2 electric burners with which to cook. Did I mind? Not in the least. To have any Paris real estate to call my own was like heaven, and my windows looked out onto a backyard garden with a peek-a-boo view of the Eiffel Tower.

Needless to say, I did very little cooking in that kitchen. I became a quick

regular at the nondescript café Le Favorit on my block and took advantage of amazing to-go foods available at nearby markets. I did come up with one “signature dish,” however, inspired by this experience: chicken with endive. Now and then, on my way home from work, I’d buy half of a rotisserie chicken from a streetside vendor and pick up a few heads of Belgian endive. With just a skillet, a dab of butter and a few splashes of white wine, this became such a satisfying meal for such limited resources. 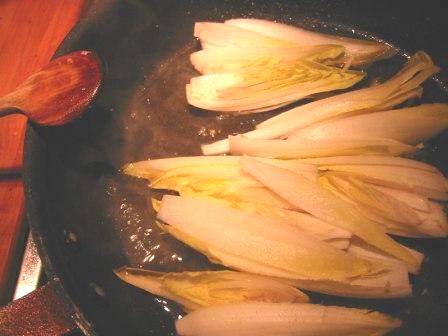 It was with that dose of nostalgia that I recreated the meal a week or two ago. I bought a whole rotisserie chicken at the grocery store and a bunch of endive, reliving for a moment the delicious simplicity of that slice of my life back in Paris. I halved the endive heads and cut out the core at the base of the leaves, which harbors bitter flavors.  Then halved each piece again into quarters. After heating a combo of butter and olive oil in a skillet, in goes the endive to saute for a bit. I don’t stir much, more just gently swirling the skillet and carefully turning the endive pieces; ideally I try to keep the portions together as much as I can. Though the random few leaves that separate? They’ll just caramelize a bit more and bring some extra, lovely flavor to the dish. It’s all good.

When the endive had started to soften and seemed about half cooked, I topped 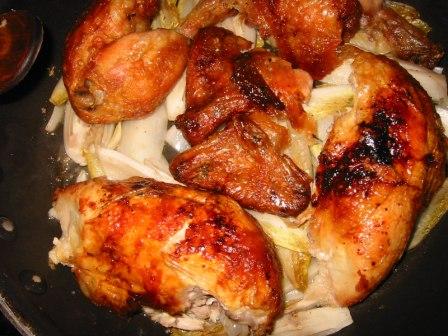 it with the portioned chicken. I drizzled a good 1/3 cup or so of dry vermouth into the pan, topped it loosely with a piece of foil and reduced the heat to low. Twenty minutes or so later, the endive will be tender, the chicken will be gently reheated and dinner will be ready to serve. If there’s liquid left in the skillet or the endive looks a bit pale, crank up the heat for a minute to polish things off.