At Seattle Bookfest in late October, I found myself chatting with a gentleman at the  Book Club of Washington booth about their organization. “Are you a collector?” he asked me. “No, not really,” I muttered. “Do you have more than 3 books at home?” Sure. Of course. Who doesn’t? Is it that easy to be a collector?

It’s surely not a fair impression, but I’ve always equated “book collector” with someone who buys volumes (often historic or otherwise singular) in pristine condition (or has them restored), then puts them on display in some elegant fashion. I sit at the other end of the spectrum. I have many hundreds of books, but they’re all over the place, some on the floor, many on shelves, some piled on the tops of said shelves. Some are new, some are old. Some are immaculate, some are verging on tattered. But it is, I suppose, a collection. If a random, unorganized, somewhat motley one.

When it comes to adding books to this collection, that’s equally random. Many show up on the doorstep, of course, as did the delicious The Grand Central Baking Book

this past week. Which was delightfully frustrating only

in that the book did not come with an accompanying piece of that Lemon Crumble Tart on page 126. I also received last week the new Coco

book from the artfully-inclined publisher Phaidon. In it, 10 master chefs from around the world (including Alice Waters, Fergus Henderson, Ferran Adrià and Mario Batali) each picked 10 chefs they feel are on the cusp of greatness, contemporary chefs that will be tomorrow’s masters. It’s a luscious, inspiring, diverse volume that is equally cookbook, culinary narrative and travelogue, with wanderlust-inducing destinations to add to the food life list. And it was great to see Seattle’s own Kevin Davis among the chefs profiled, a choice of Mario Batali’s.

Because of the existing overload of books I already own, I don’t scour bookstores–new or used–nearly as much as I used to. Now and then, I will, unable to fully shake the habit. And I usually gravitate to the old, the quirky, the unexpected, the nostalgic. I seem to have a thing for the 1950s given the number of my books–including a Ford Motor Company collection of recipes from drive-worthy destination restaurants and Esquire’s Handbook for Hosts

*–that  were published back then.

But as I first started reflecting on my oddball book collection for this post, it just happened that the first few books I reached for had a common theme. So it’s prompted me to start sharing occasional peeks at the books that surround me in this office. Starting today with the animal kingdom.

Take the Wolf in Chef’s Clothing

book I picked up somewhere along the line. It was first published in 1950 by the Wilcox & Follett Co. publishers in Chicago. Billed as “the picture cook and drink book for men” (men, those wolves!!), it takes the picture-worth-a-thousand-words ideal to the extreme. Recipes never list quantities such as “2 teaspoons sugar” instead showing a sugar bowl showering its contents into

two spoons. Hard to get any simpler than that! Recipes include Welsh Rabbit (rarebit, but who’s counting), C’est la Vie Canape (cream cheese-roquefort stuffed celery stalks) and even Crêpes Suzettes. Picking the book up again, I realize it bears some resemblance to the Look & Cook

cookbook series I worked on with Anne Willan. Which itself was inspired in part by another volume in my shelves, La Cuisine Est Un Jeu d’Enfants

(Cooking is Child’s Play). My 1965 copy includes both original and translated text, complete with forward by Jean Cocteau!

Another animalistic food book I have is less cookbook, more “food as decorative art” inspiration. L’Artichouette (which seems to be out of print) 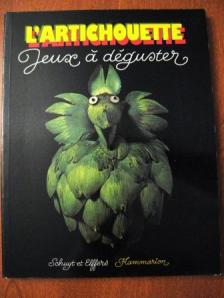 has this wild bird-like creature on the cover, with radish-slice eyes, that exemplifies the transformations found within–in this case an artichaut (artichoke) into a chouette (owl). Get it? Arti-chouette? (Chouette is also slang for “cool,” so gets extra mileage in the title.) I picked this up in France years ago, in fact it still has the Librairie Gourmande card and facture tucked inside. The introduction references  everything from the grand pièces montées of the 19th century to holiday gingerbread houses as examples of metamorphoses from food to art or structure. I haven’t tackled the carrot-race-car or palm-tree-pineapple, nor any of the creations, to be honest. It’s more a reminder of food as a source of endless artistic creativity. A more recent twist on that theme, Play With Your Food

takes it to a different extreme, less manipulating the food by trimming and cutting, more finding the hidden faces, creatures and other features that fruits and vegetables naturally serve up.

Last, a sweet, simple little book that I came across in the vast cookbook collection at Château du Feÿ when I was helping Anne Willan determine how to prioritize the 4,000-plus cookbook library there prior to their move. A few books that ended up in up-for-grabs pile caught my eye, this one included. I mostly loved the title, since I haven’t been to Norway and have not, in fact, eaten anything there. And the determined look on that chef’s face. Inside, most recipes are in that very simple brief-paragraph narrative form, including fylt kaalhode (stuffed cabbage) sursild (sour pickled herrings) and risengrøt (rice porridge).

Motley, indeed, these books I surround myself with. And with my office redo imminent, I’ll be pulling each and every one from its shelf for safe keeping while floor, walls and new furniture are attended to. Seems an ideal time to purge a few from the collection. But my money’s on 99 percent of the books coming back to the new shelves. Old or new. Quirky or not. There’s something to relish in every single one of them.

* I offer links to older books as available, though these often represent reproductions of the original volumes. I think it’s far more fun to have a copy that dates to or near the time of original publication. More authentically nostalgic with its yellowed pages, dog-eared spine, likelihood of having passed through the hands of at least a few cooks and hosts over the years.

I imagine more than a few Champagne corks will be popping over the course of this month as Seattle’s beloved Dahlia Lounge restaurant celebrates its 20th anniversary. Beyond Champagne toasts, they’re celebrating too with lots of fun and prizes throughout the month, check out the goings-on here.

Any restaurant that survives and thrives to hit such landmark milestones is something worth celebrating. (Tip of the hat to Pike Pub & Brewery where our friends Charles and Rose Ann Finkel are also toasting 20 years since they first opened doors of the brewery! Woo-hoo!!) With Dahlia, the anniversary stands out for me for a number of reasons.

Professionally, I’ve been eating at, and writing about, Dahlia Lounge and its

eventual siblings for about 18 of those 20 years. After enough meals to form a solid opinion, I came to the conclusion that–for me–Dahlia stands out as a quintessentially Seattle restaurant. Its colorful, inviting room. The professional but relaxed and friendly service. Carefully prepared food that’s got finesse without ever being fussy. Menus rooted in Northwest ingredients  and seasonality but with Asian and European influences that show Seattle’s got an open palate.

Personally, Dahlia’s been the home to a number of my own celebrations over the years, so I definitely connect with the place by way of deeply fond memories. My husband and I chose Dahlia–then in its original 1914 4th Avenue location–for the “rehearsal dinner” location when we got married in 1993. We had that upstairs area at the back of the restaurant to ourselves, and Tom cooked up the dinner. The menu included spicy cornmeal pan-fried oysters with artichoke remoulade, ginger and garlic 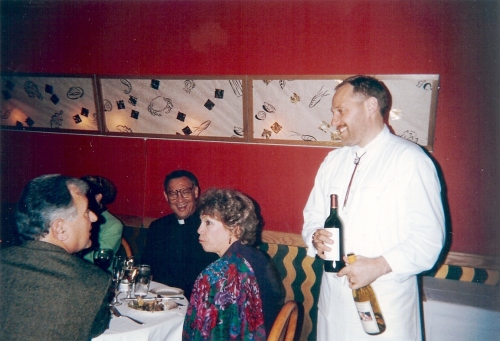 Hmmmm, looks like a bottle of Bernard Griffin? Nice.

Ten years later, it made sense to celebrate again with Dahlia. Now in its new 4th & Virginia location, we took over that back room and had one of the best nights ever with family and friends, eating and drinking well to toast a decade of married life! Mark Fuller (now making his own waves at Spring Hill in my neighborhood) was in the Dahlia kitchen then and cranked through an amazing menu that included shrimp dumplings, slow roasted sucking pig with fennel relish, salt-roasted ehu (a Hawaiian snapper) and lemon-thyme panna cotta with rhubarb confiture. What a fun and delicious night that was. I’d say that we’ll be celebrating there again in 2013 for our 20th, if not for

Ten years for Bob and me, twelve for Dahlia Lounge

our master plan to run off to Vegas and get married again on that occasion!

Dahlia opened in November of 1989, a few months after I’d left Seattle for a spell to attend culinary school in France. But I learned about the opening and the restaurant’s early popularity long distance, my mom a trooper about keeping me up to date with Seattle goings-on by way of newspaper clippings. (She also sent me every single batch of Sunday comics; oh, how I love and miss that lady!) Upon my return a couple years later, I wrote my first national magazine article about Seattle restaurants, for a May 1992 issue of Restaurants and Institutions magazine. By then, I’d had a chance to check out Dahlia Lounge in person, noting that “The free-spiritedness of chef-owner Tom Douglas makes a strong first impression when you walk in the door.” And, later, “Douglas swears that his cooking is simple, but to me, his food is testament to a Northwest culinary attitude that is deliciously refreshing to come home to.”

A couple of decades later, I think those reflections are no less true. Dahlia Lounge, Palace Kitchen, Etta’s, Lola, Serious Pie are all imbued by the free spirit of Douglas, his wife Jackie and the passionate, creative team they work with. And that Northwest culinary attitude? More than ever it’s about consciously chosen ingredients of quality, made to shine without unnecessary flair. Just great food that feeds us well, makes us happy, and makes us glad to call Seattle home.